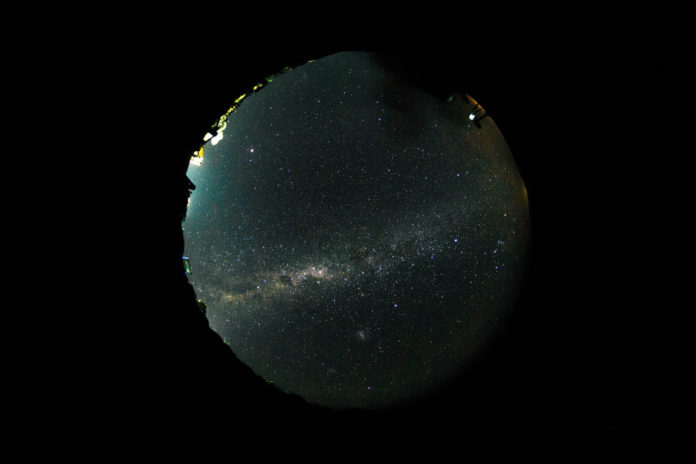 (28 February 2019 – ALMA) Astronomers have detected a stealthy black hole from its effects on an interstellar gas cloud.

This intermediate mass black hole is one of over 100 million quiet black holes expected to be lurking in our galaxy. These results provide a new method to search for other hidden black holes and help us understand the growth and evolution of black holes.

Artist’s impression of a gas cloud swirling around a black hole. (courtesy: NAOJ)

A research team led by Shunya Takekawa at the National Astronomical Observatory of Japan noticed HCN–0.009–0.044, a gas cloud moving strangely near the center of the Galaxy 25,000 light-years away from Earth in the constellation Sagittarius. They used ALMA (Atacama Large Millimeter/submillimeter Array) to perform high resolution observations of the cloud and found that it is swirling around an invisible massive object.

Takekawa explains, “Detailed kinematic analyses revealed that an enormous mass, 30,000 times that of the Sun, was concentrated in a region much smaller than our Solar System. This and the lack of any observed object at that location strongly suggests an intermediate-mass black hole. By analyzing other anomalous clouds, we hope to expose other quiet black holes. ”

These results were published as Takekawa et al. “Indication of Another Intermediate-mass Black Hole in the Galactic Center” in The Astrophysical Journal Letters on January 20, 2019.