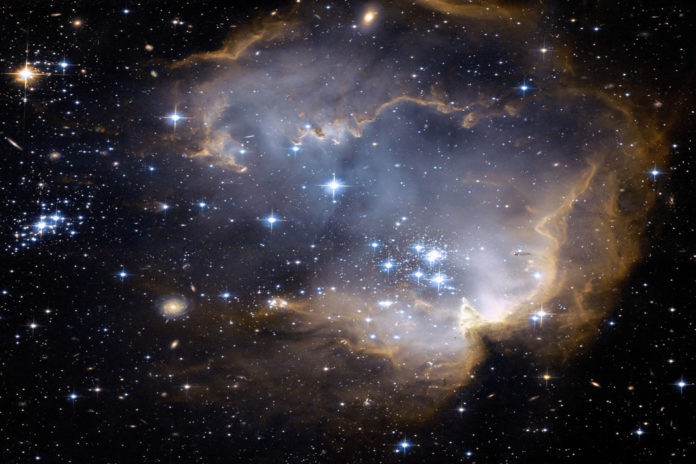 (25 February 2019 – Instituto de Astrofísica de Canarias) Towards the end of their lives some 95% of stars evolve into red giants which lose their mass via a “stellar wind”. Eventually they end up as planetary nebulae, ionized gas with a central hot star, a white dwarf.

Researchers form 14 European scientific institutions, among them the IAC, have detected the existence of a binary interaction which had not been noticed by the scientific community. This new research offers an alternative explanation to the high rates of mass loss which it was thought were present towards the end of the lives of the most massive giant stars.

Red giant spiral-shaped winds: Thanks to new observations from the ALMA telescope in Chile, it became clear that the stellar wind of this red giant forms a spiral. This is an indirect indication that the star is not alone, but part of a binary star. (courtesy: ALMA (ESO/NAOJ/NRAO)/L. Decin et al.)

The study, which is published today in the journal Nature Astronomy, show that these stars lose mass at a much slower rate than previously thought. The stellar wind is not stronger than usual, but it is affected by a companion star which had not been noticed until now, a second star orbiting around the red giant. The fact that this process is slower than expected has a major impact on our understanding of how stars end their lives. As a consequence of this discovery we find that the most massive giant star need a longer time to expel their chemically rich interiors into their environment, which affects the enrichment of the interstellar medium, and therefore the chemical evolution of galaxies.

The only observatory which could provide detailed information about the disconcerting superwind in the last phase of the lives of the most massive stars is ALMA (Atacama Large Millimetre/Submillimetre Array), in the Atacama desert (Chile).”The data show a spiral structure which show that these stars are not individual have a binary companion” explains Anibal García Hernández, a researcher at the IAC and at the ULL, a co-author of the article. He adds “The interaction with its companion gives rise to a rather complex morphology, in the form of an incomplete spiral. Previous data lacked the spatial resolution and the sensitivity given by ALMA and did not allow astronomers to find the characteristics associated with a binary star”

The interpretation of the ALMA observations has shown in a convincing way that the last evolutionary phase of these old stars is not characterized by a short-lived “extreme superwind” but rather by a “normal wind” which lasts much longer. In other words “old stars take longer to die” or as a slogan “old stars live longer”.

Now the scientific community will see if the existence of a binary companion could explain the behaviour of other particular red giants. “We thought that many stars lived alone, but we will probably have to change our ideas” explains Leen Decin, the first author on the article, who is a Professor at the Catholic University of Louvain. She concludes “It is probable that a star with a binary companion is more common than we had thought”.

Stars exploding as supernovae lose their mass to companion stars during...

NSW catching up on space race with SA