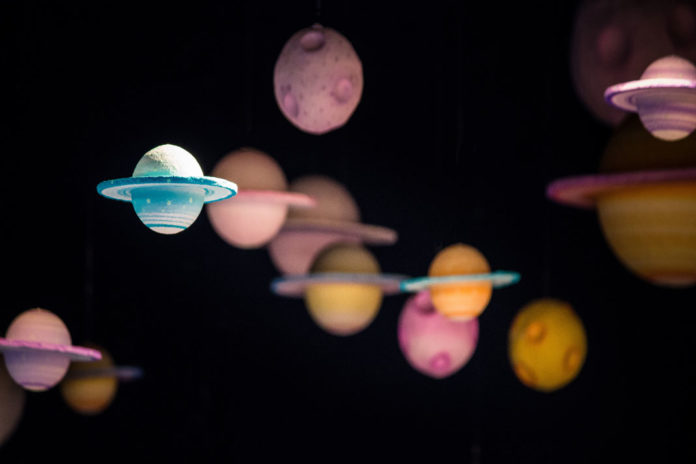 (28 February 2019 – UC Berkeley) Some of the peculiar aspects of our solar system — an enveloping cloud of comets, dwarf planets in weird orbits and, if it truly exists, a possible Planet Nine far from the sun — have been linked to the close approach of another star in our system’s infancy that flung things helter-skelter.

A planet orbiting a young binary star may have been perturbed by another pair of stars that skated too close to the system between 2 and 3 million years ago, soon after the planet formed from a swirling disk of dust and gas.

If confirmed, this bolsters arguments that close stellar misses help sculpt planetary systems and may determine whether or not they harbor planets with stable orbits.

“One of the mysteries arising from the study of exoplanets is that we see systems where the planets are misaligned, even though theyAstronomers are already searching for a stellar flyby in our solar system’s past, but since that likely happened 4.6 billion years ago, most of the evidence has gone cold. The star system that the astronomers studied, identified only by the number HD 106906 and located about 300 light years from Earth in the direction of the constellation Crux, is very young, only about 15 million years old.

Kalas and Robert De Rosa, a former UC Berkeley postdoc who is now a research scientist at Stanford’s Kavli Institute for Particle Astrophysics and Cosmology, describe their findings in a paper accepted for publication in the Astronomical Journal and now available online.

Kalas, who studies young, newly formed planetary systems to try to understand what happened in the early years of our own solar system, first focused on HD 106906 in 2015 after it was found to have a massive planet in a highly unusual orbit. The planet, dubbed HD 106906 b, has a mass of about 11 Jupiters, and it orbits HD 106906 — recently revealed to be a binary star — in an orbit tipped about 21 degrees from the plane of the disk that contains all the other material around the star. Its current location is at least 738 times farther from its star than Earth is from the sun, or about 18 times farther from its star than Pluto is from the sun.

are born in a flat, circular disk,” said Paul Kalas, a UC Berkeley adjunct professor of astronomy. “Maybe a cosmic tsunami hit these systems and rearranged everything about them, but we haven’t had proof. Our paper gives rare observational evidence for one of these flybys gently influencing one of the planetary systems in the galaxy.”

Simulation of a binary star flyby of a young planetary system. UC Berkeley and Stanford astronomers suspect that such a flyby altered the orbit of a planet (in blue) around the star HD 106906 so that it remained bound to the system in an oblique orbit similar to that of a proposed Planet Nine attached to our own solar system. (courtesy: Paul Kalas)

Kalas used both the Gemini Planet Imager on the Gemini Telescope in the Chilean Andes and the Hubble Space Telescope to look more closely at HD 106906 and discovered that the star has a lopsided comet belt, as well. The planet’s strange orbit and the fact that the dust disk itself is asymmetrical indicated that something had disrupted the young system.

Kalas and his colleagues, including De Rosa, proposed that the planet had been kicked out of its solar system by interactions with another as-yet-unseen planet in the system or by a passing star. Kalas and De Rosa now believe that both happened: The planet was kicked into an eccentric orbit when it came dangerously close to the central binary star, a scenario proposed in 2017 by theorist Laetitia Rodet and her collaborators from the Grenoble Observatory in France. Repeated gravitational kicks from the binary would have quickly ejected the planet into interstellar space, but the passing stars rescued the planet by nudging its orbit to a safer distance from the binary.

The Gaia space observatory gave them the data they needed to test their hypothesis. Gaia, launched in 2012 by the European Space Agency, collects precise measurements of distance, position and motion for 1.3 billion stars in the Milky Way Galaxy, a catalog 10,000 times larger than Gaia’s predecessor, Hipparcos.

Kalas and De Rosa gathered Gaia information on 461 stars in the same cluster as HD 106906 and calculated their positions backward in time—reversed the cosmic clock, so to speak—and discovered that another binary star system may have approached close enough 3 million years ago to alter the planetary system.

“What we have done here is actually find the stars that could have given HD 106906 b the extra gravitational kick, a second kick so that it became long-lived, just like a hypothetical Planet Nine would be in our solar system,” Kalas said.

They also found also that the binary star came in on a trajectory that was within about 5 degrees of the system’s disk, making it even more likely that the encounter had a strong and lasting impact on HD 106906.

Such double kicks may be important to stabilizing planets, asteroids and comets around stars, Kalas said.

“Studying the HD 106906 planetary system is like going back in time to watch the Oort cloud of comets forming around our young sun,” he said. “Our own giant planets gravitationally kicked countless comets outward to large distances. Many were ejected completely, becoming interstellar objects like ʻOumuamua, but others were influenced by passing stars. That second kick by a stellar flyby can detach a comet’s orbit from any further encounters with the planets, saving it from the prospect of ejection. This chain of events preserved the most primitive solar system material in a deep freeze far from the sun for billions of years.”

Kalas hopes that future observations, such as an updated catalog of Gaia measurements, will clarify the significance of the flyby on HD 106906.

“We started with 461 suspects and discovered two that were at the scene of the crime,” he said. “Their exact role will be revealed as we gather more evidence.”