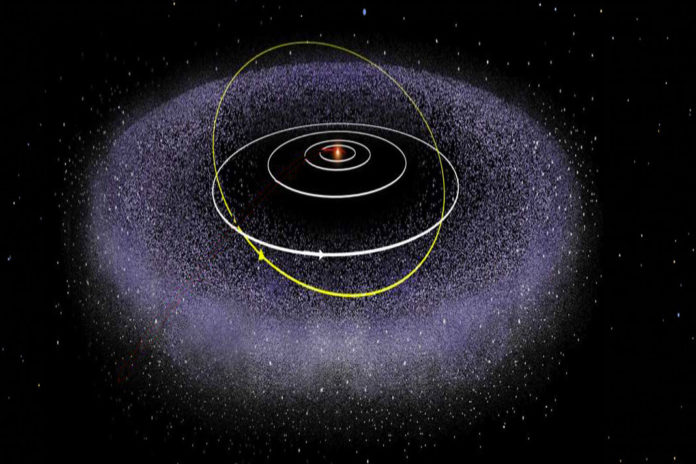 (28 February 2019 – JHU APL) Using New Horizons data from the NASA mission’s 2015 flyby of the Pluto system, scientists have indirectly discovered a distinct and surprising lack of very small objects in the Kuiper Belt.

The evidence for the paucity of small Kuiper Belt objects (KBOs) comes from New Horizons imaging that revealed a dearth of small craters on Pluto’s largest satellite, Charon, indicating that impactors from 300 feet to 1 mile (91 meters to 1.6 km) in diameter must also be rare.

The Kuiper Belt is a donut-shaped region of icy bodies beyond the orbit of Neptune. Because small KBOs were some of the “feedstock” from which planets formed, this research provides new insights into how the solar system originated. This research was published in the March 1 issue of the journal Science.

New Horizons scientists studied the craters and geology on Pluto and Charon and found there were fewer small craters than expected. This implies that the Kuiper Belt contains relatively small numbers of objects less than 1 mile in diameter. Imaged by New Horizons’ Long Range Reconnaissance Imager (LORRI), the smooth, geologically stable “Vulcan Planitia” on Charon illustrates these findings. (courtesy: NASA/JHUAPL/SwRI)

“These smaller Kuiper Belt objects are much too small to really see with any telescopes at such a great distance,” said Kelsi Singer, the paper’s lead author and a New Horizons co-investigator from the Southwest Research Institute in Boulder, Colorado. “New Horizons flying directly through the Kuiper Belt and collecting data there was key to learning about both large and small bodies of the Belt.”

Craters on solar system objects record the impacts of smaller bodies, providing hints about the history of the object and its place in the solar system. Because Pluto is so far from Earth, little was known about the dwarf planet’s surface until the epic 2015 flyby. Observations of the surfaces of Pluto and Charon revealed a variety of features, including mountains that reach as high as 13,000 feet (4 kilometers) and vast glaciers of nitrogen ice.

While at Pluto geologic processes have erased or altered some of the evidence of its impact history, but Charon’s relative geologic stasis has provided a more stable record of impacts.

“A major part of the mission of New Horizons is to better understand the Kuiper Belt,” said Singer, whose research background studying the geology of the icy moons of Saturn and Jupiter positions her to understand the surface processes seen on KBOs. “With the successful flyby of Ultima Thule early this year, we now have three distinct planetary surfaces to study. This paper uses the data from the Pluto-Charon flyby, which indicate fewer small impact craters than expected. And preliminary results from Ultima Thule support this finding.”

Typical planetary models show that 4.6 billion years ago, the solar system formed from the gravitational collapse of a giant molecular cloud. The Sun, the planets and other objects formed as materials within the collapsing cloud clumped together in a process known as accretion. Different models result in different populations and locations of objects in the solar system.

“This surprising lack of small KBOs changes our view of the Kuiper Belt and shows that either its formation or evolution, or both, were somewhat different than those of the asteroid belt between Mars and Jupiter,” said Singer. “Perhaps the asteroid belt has more small bodies than the Kuiper Belt because its population experiences more collisions that break up larger objects into smaller ones.”

The paper published in Science is titled “Impact craters on Pluto and Charon indicate a deficit of small Kuiper Belt objects.”

Australian Space Agency to Support NASA for the US Moon to...

A Great Milestone in African Space Industry-Space In Africa Partners With...

Two Smallsats Launched By Nanoracks Via The NG-15 Cygnus Mission